Learn why it's so good on everything you grill!

When H. T. duPerier of New Iberia, Louisiana developed the original Heifer Dust (pronounced Heffer Dust) seasoning back in the early 1920’s, he had no idea that almost 100 years later, it would become a staple of many backyard griller’s and cooks.  At the time, he was trying to preserve that south Louisiana flavor that his mother cooked with, and to make his wife’s Sunday pot roast taste a little better.  When we found his secret recipe tucked away in his family cookbook in the early 1970’s and made it for ourselves, we found out that this heiferdust rub goes good everything in the kitchen, not just the infamous Sunday roast.

If you are serious about your outdoor grilling, smoking and cooking, we encourage you to try our heifer dust products any way you like.  They both taste especially good on your favorite cut of steak, chicken, poultry, pork, seafood, raw oysters, char grilled oysters, wild game, even french fries, baked potatoes and even on the rim of your favorite Bloody Mary drink. You use them like salt and pepper and as a meat rub if you like.

Our second seasoning was inspired by Professional Offshore Fishing Guide, Troy Frady.  He is the grandson of H.T. and spend many hours as a child learning how to cook the way his grandpaw taught him.  The newest flavor is a Creole Buttery Grilling Seasoning.    It is another flavorful tool for your grill or your favorite meal.  This Creole seasoning is special and is nothing like traditionally marketed creole seasonings that are filled with paprika, cayenne pepper, etc.  We removed the traditional red color (paprika), cut the sodium by 25% and added a buttery flavor with  slight hint of garlic and finished with a light lemony flavor so even the pickiest of food lovers could enjoy.  This creole grilling seasoning goes good on everything.  It especially enhances the flavor of grilled chicken, pork, shrimp, oysters, fish and grilled vegetables.

Everyone loves Heifer Dust on steaks!

Amberjack fish seasoned with heifer dust rub, covered in mayo, dredged in panko bread crumbs and grilled on indirect heat at 425° until brown creates a flavor like no other. Using the best seasoning means you get the best flavor out of your meat.

When Heifer Dust rub is applied to meat, it is dissolved and embeds its flavors deep in it.  The seasoning has a small amount of salt in it,  which creates a moisture barrier around your piece of meat that allows it to cook without making it really salty tasting. That is why H.T. chose to use salt as his first ingredient. We know its value on meat as a rub. Our second ingredient is granulated garlic.   We added garlic next and we all know what that flavor does to any piece of meat.  It wakes it up, right?  I felt it would be very important to ensure that garlic flavor was on every bite, but not overwhelming. There are a few more spices in there that are a secret, but they all make this original heifer dust steak rub seasoning so good.  All we hope is that you will try heifer dust at your table and enjoy it as much as we do making it and using it ourselves.

Grilled Oysters are AMAZING with a little HeiferDust!

History of HeiferDust™ All Purpose Seasoning and Rub

As kids growing up in the early 1960’s and 70’s, we were around our Paw Paw a lot. H. T. duPerier was his name and he was one unique person. He was born in 1899 in New Iberia, Louisiana. The 1899 on the label is actually the year he was born, but the meat rub he produced came about in the early 1920’s. H.T. spent his adult life working for Texas Bread Company (Tasty Bread) as general manager, but he had retired by the time most of his grandchildren were born. As a teenagers, he shared his stories with all of us about growing up in South Louisiana, Beaumont and Houston, Tx. His great grandfather actually incorporated New Iberia in 1835. Our family also donated the land where St. Peters Catholic Church still stands today. His middle name was ToTo – which is Swahili for “Little Boy.”  As a teenager, he worked for Hughes Tool Company and used to drop off and pick up a young Howard Hughes from school.  He always talked about how different young Howard was as a child. 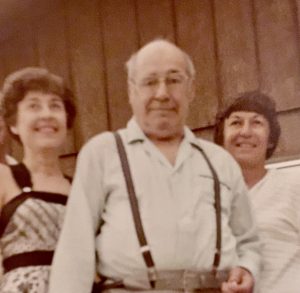 By 1964, Paw Paw was already an old man (65 years old) and was spending a lot of time with his three adult kids and their growing families. When all of us kids were around, he would not use bad language around us, but he had enough of all of us kids running around being kids, he would speak cajun french.  None of us really understood what he was saying, but he was always laughing at us kids, being kids. He nicknamed most of his grandchildren with cajun type names like Boof La Bow, T-Boog, Za-Fran, Pachee, Mon-wee and the list continues. Excuse my grammar, but I spelled those names like they sounded. When all of us kids were a running our mouths, being very active and loud, he would simply reply in that cajun tone – “Awe – Heifer Dust.”

I am not sure where he got the term from exactly, but doing some research, found out that during the early 1920’s, heifer-dust was used when someone was talking nonsense, rubbish or garbage. I do remember the term “Heiferdust” being said one time during an episode of Leif Erickson’s High Chaparral television series from November 1967 – The Widow From Red Rock episode. I pasted a clip from the tv show below, so you would see how the actor used the term in front of the lady when she said some nonsense. No matter who originated the slang words in the early 1920’s, HeiferDust term stuck with me and I have known since I was a little boy that “Heifer Dust” would be a good name for the best all purpose rub and seasoning that Paw Paw created back in the early 1920’s when he was trying to make his wife’s Sunday pot roast taste better.